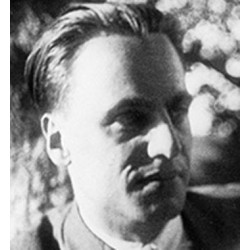 Steel tubing, applied to furniture for the home, was one of the most dramatic innovations in 20th century design, creating a radically new profile for chairs, dining tables, coffee tables and desks. The industrial material also transformed expectations of the domestic environment from one characterized by bulky upholstered chairs and sofas to one of cool, clean simplicity. Mart Stam started the revolution. Stam had studied drawing in Amsterdam from 1917 to 1919 and then worked as a draftsman for an architecture practice until 1922. Upon moving to Berlin, he met a number of avant garde architects and artists including the Russian constructivist, El Lizzitsky. While in Berlin, Stam constructed a prototype of a cantilevered chair made of welded gas pipes and plumber's elbow joints and took his experimental drawings to a meeting of architects held in Stuttgart to discuss the organization of the Weissenhof Exhibition. Stam's revolutionary concept immediately inspired Ludwig Mies van derRohe to design his own version of the chair – and Mies produced an elegant and stylized version of the cantilevered chair in 1927, perfecting his design in 1930 with the Brno chair. Marcel Breuer also designed a tubular metal chair, reputedly inspired by his recently purchased Adler bicycle. Breuer continued to pursue this form as the ideal modern chair. Eileen Gray also used tubular steel, combining it with organic materials to offset the cold quality of the metal. Netherlands (1899-1986). 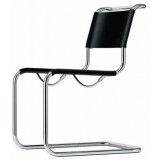 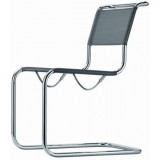 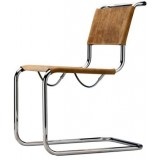 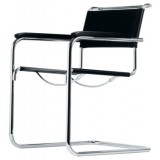 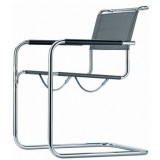 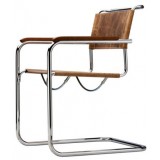 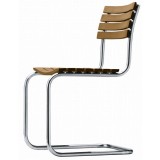 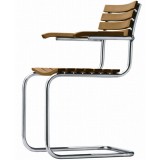