Ronan Bouroullec (born 1971) and Erwan Bouroullec (born 1976) have been working together for about ten years now. Their collaboration is a permanent dialogue nourished by their distinct personalities and a shared notion of diligence with the intention to reach more balance and fineness.In 1997, they presented their Disintegrated Kitchen at the Salon du Meuble in Paris and were spotted by Giulio Cappellini, who gave them their first industrial design projects, notably the Lit clos (“Closed Bed”) and the Spring Chair.

Today, Ronan and Erwan Bouroullec design for numerous manufacturers, namely Vitra, Kvadrat, Magis, Kartell, Established and Sons, Ligne Roset, Axor, Alessi, Issey Miyake, Cappellini, Mattiazzi, Flos, Mutina and more recently Hay. At the same time, they maintain an experimental activity which is essential to the development of their work at Galerie kreo, Paris. They also embark on occasional architectural projects such as the Floating House in 2006, the Camper stores in Paris, Copenhagen and Rome (2009-2011), the Casa Camper Hotel’s restaurant, Dos Palillos, in Berlin (2010) and the Kvadrat showrooms in Stockholm (2006) and Copenhagen (2009).

Several exhibitions have been devoted to their work. These were showcased at the Design Museum, London (2002), at the Museum of Contemporary Art, Los Angeles, the Museum Boijmans van Beuningen, Rotterdam, the Victoria and Albert Museum (2011). Designs of the Bouroullecs are part of select international museums’ collections such as the Musée National d’Art Moderne – Centre Pompidou and the Musée des Arts Décoratifs in Paris, the Museum of Modern Art in New York… 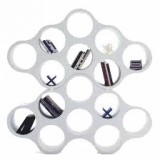