Patricia Urquiola (born 1961) is a Spanish architect and designer. She attended the Faculty of Architecture of the Technical University of Madrid were she graduated in 1989 having done a thesis with Achille Castiglioni. From 1990 to 1992 she was assistant lecturer on the courses held by Achille Castiglioni and Eugenio Bettinelli both at the Politecnico di Milano university and at the E.N.S.C.I. in Paris.

From 1993 to 1996 she had an associate practice with architects de Renzio and Ramerino and was engaged in architectural design, showrooms, restaurants and franchising (Maska/Italy, Tomorrowland Stores/Japan, Des Pres/France). In 1996 she became head of the Lissoni Associati design group, working for Alessi, Antares-Flos, Artelano, Boffi, Cappellini, Cassina, Kartell, and others. At the same time, on her own, she designed for B&B Italia, Bosa, De Vecchi, Fasem, Kartell, Liv΅―it, MDF Italia, Molteni & C., Moroso and Tronconi and designed stands and showroom for Knoll, Moroso, Sag 80, and Somma. She has greatly contributed to B&B Italia Outdoor, releasing three collections from 2007-2009: Canasta, Crinoline and Ravel.

Her products were selected for the Italian Design 2001 exhibition and for International Design Yearbook 1999 and 2001. In 2001 she was chair of the jury for the 19th CDIM Design Award and was lecturer in the Domus Academy. She is currently conducting her professional activity in her own studio in Milan in the field of design, exhibitions, art direction, and architecture. 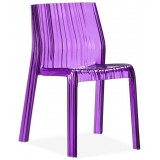