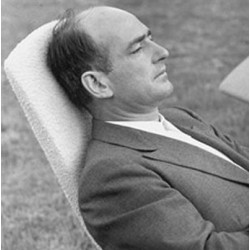 Harry Bertoia (March 10, 1915 – November 6, 1978) was an Italian-born artist, famous sculptor and furniture designer. At the age of 15 Harry moved to Detroit MI, where he enrolled in Cass Technical High School. There he studied art, design and handmade jewelry making. In 1937 he received scholarship at the Cranbrook Academy of Art where he met Charles and Ray Eames. Later Harry designed wedding rigs for them. Some years later he even briefly worked with Charles Eames in California experimenting with molded plywood.

In 1950 Harry Bertoia moved to Bally Pensilvania and established his own studio. There he started to work with Knoll furniture design company. His famous furniture design came as Bertoia Collection for Knoll. One of the five wire pieces was mid-century classic Diamond Chair. His collection received immediate commercial success, the royalties allowed Bertoia to devote himself almost entirely to sculpture. The first commissioned sculpture that Harry built, thanks to Eero Saarinen, another friend he had met at Cranbrook, was in 1952 for the General Motors Technical Center. He crated another sculpture commissioned by Eero Saarinen for the altar in the Massachusetts Institute of Technology Chapel, built in 1955.

He liked to work mostly with metal, in his sculptures he explored the ways in which metal could be manipulated to produce sounds, crating his famous tonal sculptures. He even recorded 11 albums with the sounds from one of his sculptures known as Sonambient. Harry Bertoia made more than 50 public sculptures that can be seen in many cities all over the United States and abroad. Many museums have Harry Bertoia’s sculptures in their permanent collections. 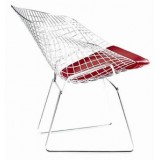