Poul M. Volther 1923-2001 was a Danish architect, of a generation of architects with solid roots in the very best of craft. As an exponent to functionalism he was against fads and aesthetic smartness and he loved the simple manufacture of fine materials. Poul M. Volther was a trained cabinet-maker and later he graduated from The School of Arts and Crafts. As a teacher at The Danish School of Art and Design he has influenced hundreds of young designers' sense of craft quality. From the beginning it was clear to everyone that this Danish designer had a great future. His designs were something that had never before been seen. The Volther Corona chair that was designed in 1961 was not introduced to a wider audience until 1964, when it received much attention and recognition. 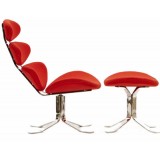