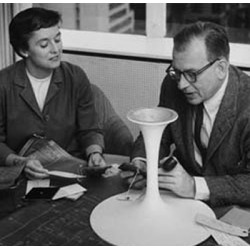 Eero Saarinen, Finnish architect and designer from the city of Kirkkonummi, started his academic studies with an important experience in Paris, France, from 1929 until 1930 that positively influenced his creativity and his enthusiasm about the art field. Subsequently he enrolled at a degree course in architecture at the Yale University, New Haven, Connecticut, US, and graduated in 1934.

Among Eero Saarinen's work partners and friends were Charles and Ray Eames with whom he worked in the environment of the Cranbrook Academy in Bloomfield Hills, Michigan, US, university at which the famous architect Eliel Saarinen, his father, was teaching. One of the elements that characterise the work of Eero Saarinen, both in architecture and industrial design, is the originality, diverseness, and uniqueness of every single creation. In 1940 Eero Saarinen and Charles Eames took part in the "Organic design in Home Furnishings" competition mounted by the Museum of Modern Art in New York. While Eames continued to work on molded furniture in plywood, Saarinen chose other materials.

Eero Saarinen designed a lot of different pieces of furniture, including the "Grasshopper" armchair with bent armrests of laminated wood. He also designed the "Womb" collection, which was, as the name suggests, to make those seated on it feel as secure and cozy as a fetus in the womb. The "Pedestal Group", is an Eero Saarinen collection of chairs and tables made of plastic and featuring only one central leg ending organically in a round disc on the floor. The "Tulip chair" also belonged to this group, with which Eero Saarinen wanted to abolish the "miserable maze of legs". In 1951 he designed the "Saarinen Collection", consisting of several office chairs, one of the first lines in designer office furniture. The Saarinen table has become one of the most famous pieces in the Saarinen furniture collection. Created in 1957, this beautiful Saarinen table envelopes the thought and theory behind one of the 20th century's great architects. Constructed of cast aluminum, the table flows from top to bottom and from side to side in a fluid exchange of lines. Saarinen used a variety of bases and tops for various interiors during his career. The tulip table shown here is a favorite as it can be used in a variety of spaces, but is most commonly used as a side table.

Eero Saarinen was known for a number of land breaking achievements during his career, especially as an architect. His buildings throughout the United States are still recognized as wonders, and many have become landmarks, such as the Gateway Arch in St. Louis. Bauhaus2YourHouse is proud to offer customers the opportunity to being the beauty and innovation of Saarinen furniture into their own homes.

Eero Saarinen designed the Tulip Chair (1957) at the peak of his career. His work in the 1940's began focusing on "organic furniture" in which he aimed to restore formal order to the typical interior setting. His vision was to free the interior space from the "sea of legs" that he saw creating "an unpleasant, confused and restless atmosphere." The Eero Saarinen Tulip Chair represents Saarinen's synergy of that vision and its embodiment in a tangible form. The Saarinen Tulip Chair continues to be one of the most popular items from this mid-century master. 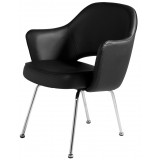