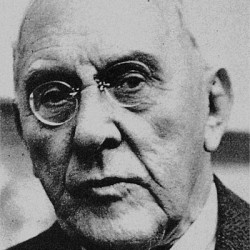 Josef Hoffmann (1870-1956) was Austrian architect, interior designer and applied artist and designer of consumer goods. He studied architecture at the Academy of Fine Arts in Vienna, Austria, under Art Nouveau architect Otto Wagner under Baron C. Hasenauer, whose theories of functional, modern architecture profoundly influenced his works, and in 1896 he joined Wagner’s office.

In 1898, he established his own practice in Vienna. In 1897, inspired by Mackintosh and the Glasgow School, he was one of the founding members with Gustav Klimt, of an association of revolutionary artists and architects, the Vienna Secession. In 1903, he founded with architects Koloman Moser and Joseph Maria Olbrich, the Wiener Werkstätte for decorative arts. They aspired to the renaissance of the arts and crafts and to bring more abstract and purer forms to the designs of buildings and furniture, glass and metalwork, following the concept of total work of art. Hoffman's works combined functionality and simplicity of craft production with refined and innovative ornamental details and geometric elements. He is an important precursor of the Modern Movement and Art Deco.

In 1905, Hoffmann, Klimt and the Wiener Werkstätte artists, designed the Palais Stoclet, in Brussels, the Capital of Art Nouveau and city of Victor Horta. The Art Nouveau concept of a "total work of art " was fully realized in this magnificent house. Every detail, surface, ornament, inside or outside, is the complete expression of harmony and beauty: from the façade in gray marble and bronze fittings to the elegant garden lay-out; from the entrance hall and salons to the private concert hall, decorated with marble of various colors. The master piece of the house is the luxurious dinning room, decorated with black and white marble, rare wood and gold-embossed leather furniture, enriched by silver table decor and silverware designed by Hoffmann.

The square is a commonly recurring motif in his work. Hoffmann was the pioneer of Viennese art nouveau, during the early years of the century he produced radical forms reminiscent of the abstract Cubist style, later changing to more moderate forms and finally he used classical elements - as was typical for his generation (Villa Skywa-Primavesi, 1913-1915); also introduced some elements of art deco. He was awarded the Grand Austrian State Prize in 1950. Still today, some of his domestic designs are still in production. One significant example of Hoffmann’s strict geometrical lines and the quadratic theme is the iconic Kubus Armchair, designed in 1910 and presented at the International Exhibition held in Buenos Aires. 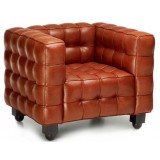 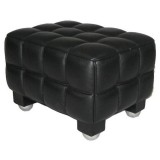 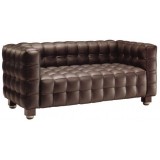 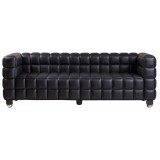